Where in the world is Sami Valentine?

I’m currently in Bulgaria in the same village where I wrote Down & Out Witch and finished A Witch Called Red. This is one of my favorite places to chill out in Europe and enjoy a slower pace of life. I’ll be here until mid-July, so I can launch Payback’s A Witch which comes out on July 26th. Preorder a copy here. The link will ask you what you preferred Amazon store is.

June was frantic with exciting travel and I would love to share a peek at some of the journey. For some context, I started working remotely in 2017. As a child-free singleton, I didn’t have any obligations holding me, so I started traveling the world, staying in Airbnb, Hostels, etc until 2020. This summer was a return to form except way faster than I used to travel (usually 1-3 months in one place).

In June, I took planes, trains, buses, and ferries to…

I am fortunate in that I had a bit of karma returned to me. I helped a friend out 3 years ago with a few things which led to her creating a wildly successful business. It was sold this year, so she took me on this Mediterranean tour as a thank you.

My trip started in Boston where I went to a wedding for another good friend. I’ve never been to Boston but I only had enough time to have some clam chowder, attend a wedding party, before I beat feet to the airport to Paris.

I scored a ridiculously low (compared to the current inflated prices) ticket on a new airline (Play) to Europe, where I had to do a stopover in Iceland. The customs agent asked if I had enough money to be in Europe, I refrained from joking that he’d already guessed that I was a writer.

In Paris, everything has the passion, the attitude, from the pigeons to the daring scooter drivers to that woman at the bus stop picking her nose with gusto.

Calvi, Corsica is one of many places that claim to be Christopher Colombus’s hometown. According to local legend, due to the contemporary reputation of the so called rowdy Corsicans, he lied about where he was from. It’s truly beautiful with blue waters and green hills, so I’d claim this city if I could!

A French cat came right to me and demanded pets. I said oui oui.

My friend was like ‘you refuse to sit on a public staircase because you think men peed there but you’ll rub the street cats?’

My last city in Corsica was Bonifacio. My favorite sight was the Cimiteriu Marinu di Bunifaziu. It looked like a village of the dead with house-like crypts. There was a small plot for American soldiers who died on the island in WW2. In most of the towns that we were in, there were WW1&2 memorials for navy and air force fighters.

We stayed in the citadel on the limestone cliffs. The walk up to our rental was a little scary with essentially a rope and stairs that were pretty much a ladder, but the view from the terrace was amazing!

If I were to film a Western and had to do it in Europe, Sardinia would make for a good facsimile.

I only visited one city in Sardinia (Alghero) but I packed a lot of adventures in my few days there. I toured the grotto of Neptune which was a fascinating sea cave complex best reached by boat. Since I was in Italian territory, I decided to learn how to make pasta from a Sardinian mama. Could I replicate that at home? Who knows, but I enjoyed eating my efforts!

Like Corsica, Sardinia spent much of its history fighting invaders and pirates coming from over the sea, so every major port city has a citadel and left over fortifications. Alghero still has its catapults! I assume used to toss unruly tourists into the Mediterranean.

The Sicilians kept asking me if I am too hot with their weather,

but as an Arizonan, I’m legally unable to admit if the temperature is too hot. I can only say it’s fine, I’m from Arizona.

However, it was quite warm there, so I spent a lot of time in museums. I really liked one about all the ancient artifacts from the Roman and Greek periods. Sicily was first a Greek outpost, then a Carthaginian one, and finally Roman, then their middle ages were spent being kicked around between the Spanish, Italians, and North Africans.

I also had a chance to tour a house-museum which was the preserved house of a very very wealthy Sicilian noble family that had been continually habitated and redecorated since the 1300s. The stables still had their many carriages. They were smaller than you’d think especially the benches which is a detail that is hard to catch in history books. I’m currently working on a prequel series to the Red Witch Chronicles, which is set in the late Victorian era, so I’ll be sure to be aware of that fact. Preorder the first in that new series here.

My travel day started at 6:30am in Palermo and proceeded for 16+ hours in planes and airports, then a very delayed 2 hour bus ride. I arrived at my accommodations in Bulgaria after midnight, fearing that the guesthouse lobby would be closed. I hiked up the village hill with my bags, using Google maps to help me in the winding streets with signs that I can’t read. Finally, I found it and thank God, the door is open.

The elderly hotel owner, a wrinkled man with twinkling eyes, walked into the dark lobby. He said, “Sam?”

I nodded, expecting to pull out my passport and credit card to pay.

He handed me my room key with an understanding smile and saod, we talk tomorrow, then pointed me towards the upstairs. Then he wandered away into the back.

Bless him. I was ready to drop on my feet. I fell asleep to the sound of the creeks in a quiet village in the Pirin Mountains… I’ve spent the time catching up on my day job and feeding the many village cats that hang out in the restaurant patios.

Thanks for reading this blog. I need to go back to reviewing book edits for the Red Witch Chronicles. I’ll be back in the states soon enough, but for now, I’m enjoying village life. 🙂

PS. Want to help me buy a plane ticket home? Buy some books! ;P Just kidding, I have a return ticket. Payback’s a Witch comes out on July 26th so you still have time to catch up on the series! 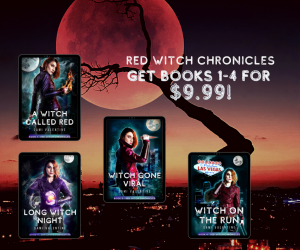 SALE ON BOOKS 1-4 FROM OCTOBER 11th-16th! Read the series that reviewers say is “Like the Vampire Diaries had a love child with the show

Black Market Witch is out!

Hi, how are you? I’m delighted to finally share Black Market Witch with you. This book begins a plot arc that I’ve been planning and 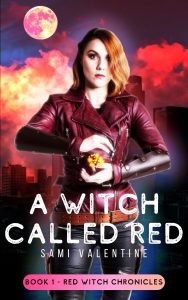 When Red woke up in the hospital, she didn’t know who she was, but she knew vampires existed… Taken in by a supernatural bounty hunter,