Red trudged into a rainy London alley. Two stern men in brown suits gripped her elbows as if still worried she’d run. She ripped out the tranquilizer dart poking from her stomach. Lightheaded and bound by anti-magic handcuffs, she kept the wary anticipation off her face.

They were leading her straight to her enemy.

The new head bard, Felix Williams, supervised the progress from under an umbrella. He saw her as an outlaw. Red looked the part in a black steel-boned corset that protected her like Kevlar. Her matching skirt concealed slim-fit trousers. Rain dissolved the bloodstains on her clothes. The bards had taken her weapons, starting with her magic and ending with her mother’s ring.

They wouldn’t have either for long.

An armored van waited on the curb with open doors. Armed guards in black tactical uniforms surrounded the vehicle with the precision of ex-military. Three of them lifted an unconscious Maxwell Baldacci into the back.

“So, you already collected the trash,” she said. She would’ve pitched a fireball at the warlock if her powers weren’t suppressed. He should be dead for what he did to her mother. She had chased him around the globe for months before their showdown tonight at the headquarters of the Brotherhood of Bards and Heroes. He was almost vanquished when the bards intervened and arrested them both for the collateral damage.

Maxwell couldn’t hide from her anymore—and certainly not where they were going. He could go to hell and she’d follow him there to make sure he was dead. Her life and her loved ones wouldn’t be safe until he was gone for good.

The bard who had clamped her in cuffs earlier shoved her to one of the guards by the van. He wiped his hands on his pants as if he felt soiled by touching her.

Red tripped, eyesight blurring from the tranquilizer, and regained her footing on the cobblestones. Her vision cleared on two cold iron cages that divided the back of the armored van. The warlock drooled in one of them, weak and nearly comatose from an earlier magical attack. If she and her friends had had one minute more, he would’ve been defeated. Soon, he would be.

“You can’t hurt her,” Vic Constantine yelled from behind them, running out into the rain to save her as he had so many times before. His leather bomber jacket flapped against his Metallica shirt. It wasn’t a superhero cape, but he wore it like one. “She just caught the bad guy for you!”

“Hush,” the guard said, pausing as he held her arm. A Christmas shirt hem peeked from under his gray body armor. He must have been celebrating the solstice with the Brotherhood when she and the warlock had crashed the solstice consortium afterparty. Judging by his confusion, the speedy orders to assemble for duty were vague ones.

Felix Williams turned to Vic. Cold and composed under his umbrella, the new head bard seemed neutral like a judge. A tense vein pulsed in his high forehead above his bushy white eyebrows. A quiet fury sharpened his British accent. “She allegedly killed my predecessor.”

“No, she didn’t. She’s innocent, Felix,” Vic insisted, shaking his head. His rain-soaked mullet stuck to his cheeks. Her denim-loving mentor had so much faith in her. It broke her heart.

“That is for a Brotherhood inquiry to discover,” the head bard said.

Red slumped over before the guard jerked her upright. A warm flush rose up her neck as her head swam in a pharmaceutical haze. Fighting against the sedative, she slurred, “I was promised a solstice sanctuary. You promised to shield me until justice and stuff.”

“How much did you guys drug her?” Vic said, rushing forward. The two other bards blocked him, grabbing his shoulders.

Felix strode to the van and peered at Red as if calculating when she’d drop. She met his eyes to prove that she was dazed but not down. He said, “How could we allow her to remain awake? We both saw what she could do. Confine her in the back.”

The guard swung Red into his arms and set her into the cage in the van, closing the door. Her sluggish limbs moved too slowly to stop him. A wave of nausea flattened her. She kicked weakly at the iron bars.

Felix Williams examined his caged prisoners like they were animals unfit for his zoo.

Vic shrugged off the bards and stomped to their leader. “If you aren’t killing her, where are you taking her?”

“Where I know that a witch of her strength can be secured.”

“You wouldn’t put her in the usual lockup. Not with a brewing scandal like this,” Vic said. He winced, closing his eyes. “It has to be Stonetree Prison. You’re sealing her in with the worst demons and killers—”

The head bard murmured so quietly that she almost missed his words. “How do you know that place? Did Crispin tell you?”

“It’s the Brotherhood’s combination of Area 51 and Alcatraz. You guys in leadership think that if you deem something top secret it’ll stay that way,” Vic said. He poked his own chest. “I can sniff out a conspiracy like a werewolf after puppy chow. If you think that you can blame her for Maxwell and bury his fucked-up alliance with your predecessor—”

Felix blustered, “Consider yourself fortunate that I don’t imprison you as her accomplice.”

Red knelt in the van, pressing herself against the cage. “Vic, I don’t want you in trouble.”

“Intern, you sound like you chugged a bottle of tequila. I’ll handle this—”

“No,” the head bard declared. “You, Stacey Bonner, and Jacob Crispin allowed that shameful scene on these hallowed grounds during the consortium of all nights!”

“We were hunting a dark warlock—”

“My respect for your families and your own records afford you the benefit of innocence. That benefit can disappear.”

Red leaned her forehead against the bars, choked from the thought that Vic would pay for her actions. She’d sacrificed so much to bring him back from the dead. She couldn’t ruin his new grasp on life. “All he did was expose Maxwell’s crimes. He doesn’t know what happened before the warlock and I appeared at the consortium. I haven’t told him half of what I’ve done.”

Doubt entered Vic’s gaze like he was scared of what he’d learn. The head bard nodded as if he’d suspected it already.

“I’m sorry,” she said. Darkness tinted the edges of her vision as she grew dizzy. “I didn’t know what the warlock was willing to do.”

Felix clapped a hand on Vic’s shoulder, sheltering the younger bard under his umbrella. “Constantine, once the Brotherhood hears the accusations, she isn’t safe in London. Neither are you or Bonner.”

Guards pulled Vic back at their boss’s nod. Another one closed the back doors of the van. The slam echoed on the metal walls but didn’t wake the sleeping warlock.

Red sank against the bars, head bobbing. She fumbled with her emerald necklace, moving the latch to her chest and unhooking it, then put it in an easy to reach skirt pocket. Well made with a thick chain, the necklace had been a birthday gift from her beloved Kristoff Novak. He’d approve of her new use for it. Sprawling her legs out, she forced herself to stare at Maxwell in the other cage. The call of the tranquilizer lulled her, but she couldn’t forget her purpose—his demise.

When she had a second chance against the warlock, she’d be ready.

Red dozed until the van slowed. A migraine blasted behind her temple like a hangover, but she wasn’t super stoned at least. She sniffed. The air smelled different. Cleaner, like she wasn’t in a city. Foggy from the tranquilizer, she stood, hitting the ceiling of the cage. She dropped to her knees, rubbing her head. “Shi—”

She waited, hushed, until a guard unlocked her cage. Acting faint, she stumbled from the van and shivered in the cold rain. She stood in a growing puddle by a rundown brown barn. To the east, a line of oaks obscured a distant manor on a secluded country estate. A floodlight switched on, killing her night vision while illuminating the three guards that surrounded her. Squinting against the brilliance, she made out a security camera over the barn door.

The guards stood the mumbling, barely conscious Maxwell on his feet. She inched closer to him, reaching into her pocket. Her heart pounded so loud that she worried everyone could hear it and guess her next move.

One guard walked under the camera to tap an intercom keypad by the door. He announced to an unseen watcher, “The head bard says to take these prisoners to the villain’s walk.”

A speaker crackled to ask, “Joan Cormoran sent you?”

“Felix Williams did,” the guard said.

“Felix? I don’t understand,” the speaker boomed with audible disbelief.

A second guard joined the first at the intercom. “It’s complicated, innit?”

Red fell against the van, pretending to faint, angling herself behind Maxwell. His guard seemed more interested in the discussion than the prisoners. She pulled the necklace from her pocket and gripped the ends with both chained hands.

The third guard absently leaned the swaying warlock on the van and stepped toward the barn. “It’s pissing rain. Tell them over tea.”

She struck when the guards weren’t looking. Looping the necklace over Maxwell’s throat, she tugged it back to strangle him. She could end his centuries of terror and mischief now.

Maxwell gurgled, weakly clawing at his neck. After his ass-kicking in their last fight, he could barely move. She could nearly taste his defeat. The arrogant mastermind dropped to his knees.

Red tightened her makeshift garrote. A buzz like a thousand wasps sounded in her ears. It drowned out any thought but revenge. She whispered to him, “This is for my mom!”

“Fuck,” a guard yelled, spinning around to his prisoners. “I thought you said she was sedated?”

The barn opened, and a man with a tranquilizer gun ran out.

Red pressed her boot against the warlock’s back and yanked. A black feathered dart hit her shoulder. She didn’t flinch at the pain. Two more hit her arm. The instant sting faded as drowsiness overwhelmed her. She wilted, dropping Maxwell onto the muddy ground.

As the guards dragged her away, she muttered, “I won’t give up.”

Be the first to read more by preordering your copy of Prison Witch and get a copy delivered to your Kindle on release day. You’ll save a $1 by preordering. 🙂 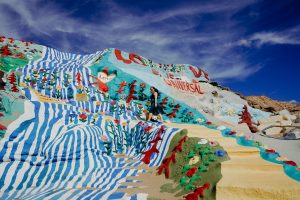 Newsletter #8: For the last few years, I have been living a double life….

No, I am not robbing banks across Texas or singing cabaret in a Berlin nightclub. My double life is that I am a mild-mannered career 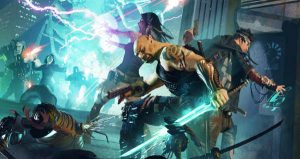 Urban Fantasy Releases to keep you reading long through the winter’s night! 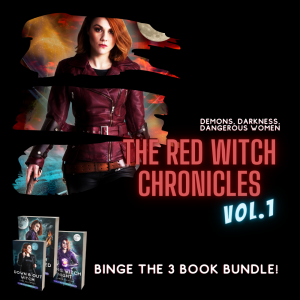 🌙3-eBOOK SALE –.99c for a limited time!🌙 Get over 800+ pages of thrilling urban fantasy adventure for .99 or read for free on Kindle Unlimited.