The bank agent shuffled his papers on his desk as he awaited his client. He had heard rumors of some of the strange clients that Smith & Reaper served, but it was only after his promotion to the Prague office that he had encountered one. Even after weeks, he still couldn’t figure out the foreign woman- Miss Juniper St. James.

He found her a shade too precise in her words.

It wasn’t the language barrier. The Kingdom of Bohemia in Austria-Hungary was part of an empire of many languages. Her Czech might have been nonexistent, and his English might have been poor, but her German was more than suitable even if she had rebuffed his offers of private language tutelage.

She doled out her words, sparse and evenly, with the demeanor of an older woman. It wasn’t entitlement or even arrogance in her tone. Simple expectation. There was something unnatural about a pretty young woman who spoke with such quiet finality. He didn’t find it unattractive yet…what woman didn’t yield to her masculine superiors in matters of finance?

He expected someone meeker when the unchaperoned slender redhead, clad a black widow’s dress, first walked into his office four months ago.

The expectation that his client, Mr. Byrnes, had set up his cousin and widowed ward as an agent to rubber-stamp paperwork had been dashed midway through the first meeting.

“Now, Miss St. James, you must concede that selling your stock in the Pennsylvania refineries to put it into Thomas Edison’s Lighting Companies is risky. I propose keeping the stock and investing in rubber plantations in-”

“Mr. Holtz, I appreciate your candid advice, but knowing what I do…” Her lips twisted into a small smile before it disappeared like a ghost. “…about Mr. Byrnes, I will have to dismiss it. Electricity is what’s next. And my cousin… has a long eye to the future. In any case, I have firm instructions to implement and I do so need an agent who can assist me.”

It wouldn’t be the last time that she made it clear, very politely, that her needs would be met, or another would be in his place.

He had stopped from arguing against her again after they signed the papers on the Byrnes residence in Prague. She didn’t blink when he railed against her absurd plan to hire wretches from the poorhouse to become servants for her new opulent home. He wasn’t going to be her agent and Czech translator so she could hire servants with no references, no family ties… she was begging to be robbed blind before her so-called servants fled back to the streets with her silver.

Juniper had listened to his impassioned speech about her naive yet compassionate nature without a word.

“Call it a social experiment, but it is hardly charity, Mr. Holtz and it will be done.” The quiet resolved tone sounded queer coming from a woman who looked not yet three and twenty.

An experiment it was. In between translating her dialogues with the craftsman renovating the mansion, he saw her ragtag group turn into proper servants over time.

Now, all their planning was going to be put to the test when the mysterious account holder, Mr. Byrnes arrived with his family in tow.

Heinrich pulled himself away from his thoughts. He stood when she strode into the office with a small umbrella.

Exchanging pleasantries with notable brevity, she sat across from him at the desk. He had long since learned that she wasn’t a woman for small talk, so he didn’t press her for musings on the weather. He assumed that was the American fashion. Mr. Byrnes had implied that about his shy cousin.

Holtz wouldn’t have used the word shy for the woman. Mysteriously reserved suited her more.

Outside of her family’s financial interests and her own altruistic idealism, all he knew about her was that she had learned German in his home city of Berlin. Weeks ago, he had hoped to bond with her as both were young and relative newcomers to Prague. And yes, the fact that she was a young, pretty redhead with family money and without a husband was immediate to him upon their first meeting.

She dismissed his implied suit with polite ease and kept the shutters closed on her personal history.

He didn’t assume that her shell would crack in their last meeting before her family returned and propriety dictated that a man took her place at the next one.

They discussed last minute plans for increasing the grocery delivery suitable for the more than doubled household and ensuring the season tickets to both the ballet and opera. Craftsmen to be paid with credit, a shipment of lime bought with cash and other mundane transactions dealt with in quick decision. Her green eyes scanned the ledger tables with calculations spinning like clockwork within them.

Holtz felt as if he were there to rubber stamp her decisions.

Her polite yet brief responses made him want to fill the silence. It wasn’t her even words that unsettled him. It was those deep pauses and silences. There was something in the silence there. Her big green eyes and reserved rosebud mouth kept her secrets, but that silence felt deafening coming from the widow in black.

The red blotter sheet on the desk stretched between them like an ocean of blood.

He coughed to recover himself from his queer thought and began to babble in a manner most unfitting a man of nearly thirty years old. “Yes, Miss, well, that is the long and short of our responsibilities today. Admirably done. I know that you must be bursting with excitement with the soon arrival of your cousin and family. I can’t wait to have the pleasure of their acquaintance. I suppose that I will unfortunately enjoy less of your company when your cousin will liaison with me in your stead.”

She blinked at him. “Excited is a word for it. Bursting, may be another. Yet, Mr. Holtz, while you may meet my… family.” She swallowed and tightly smiled in a silence that roared for a moment before she spoke again. “My cousin will not be visiting you during business hours.”

“When will I meet Mr. Byrnes then?”

“After your introduction? Only in the case of failure. I advise against that.” She nodded and quirked her mouth in an expression that could have meant anything. Her serious green eyes made it clear that it wasn’t a smile. “He is a busy man, after all.”

He smiled and chuckled politely to what he assumed was a joke. He felt her silence creep up against him again. “Of course. I assume that a man will soon be appointed in your stead to work with me.”

She shook her head and stood with a small curtsy. “Indeed, not, Mr. Holtz. You are stuck with a woman looking over the account. Less frequently now that the house has been fully restored but stuck nevertheless.” Pivoting on her black booted heel, she looked at him over her shoulder as if remembering an afterthought. “That only changes in the event of my death.” She shrugged. “Probably.”

He laughed again at her odd humor, yet a chill rose up on his skin. He tried to make one of his own quickly with a pure fervent desire to not allow a pause in the conversation. “Come now, a woman like you will soon be wed again with no time for numbers.”

“One wedding was enough for me, sir.”

Its November already? My month has been wild but I am looking forward to the holidays. I’m excited because I have a new nephew. He 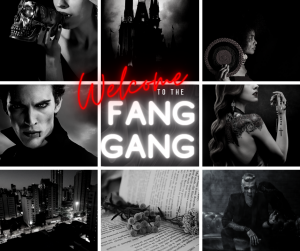 Instead of April Fools, I am more interested in spooky aesthetic this spring. Anyone else dreaming of Halloween? If you are, scroll down to find