Kristoff adjusted his livery jacket once more before he clasped his hands behind his back. He focused on the calmness of Miss St. James to his right. Trying to keep his eyes straight ahead, he couldn’t help but notice how the flickering lights of the railway station’s gas lamps caused her red hair to glimmer.

She kept it tight in a large bun at the base of her neck, but even the severe hairstyle couldn’t hide the color. The black of her widow’s dress only brought out the vibrancy of her hair and the purity of her features. It’s simple silhouette only highlighted her slender figure. She seemed determined to not be seen. Yet he had trouble looking away.

Nedda caught his gaze. An elaborate braid of shining brown hair draped above her forehead and almost angelic looking features. That youthful cherubic face belonged to a former pickpocket and a current sassy maid. She rolled her eyes at him before getting into a mocking impression of his polished pose.

Kristoff paid it no mind. Nedda might have been saucy, but there was no poison in her mockery.

Their alliance was the catalyst to order in the household when the mistress had first assembled them from the poor house all those weeks ago.

Months ago, Nedda had sighed at him when he turned the corner in the kitchen and just pointed to the old woman in the chair, arms crossed and with frizzled gray hair escaping her bun, sitting by the fire. “Mrs. Lightfingers here thought that she would make off with the mistress’s silver spoons.”

“Your mistress is a fool.” The old woman sucked at her front teeth before spitting onto the ground. Her partial cataracts didn’t cover the bile in her stare. Arthritic hands curled on her lap. Despite being the least likely to find a job through the poorhouse and therefore the one who should have been the most grateful, she had been a bellyacher from the beginning.

Kristoff stepped close to the crone. “No, she provided us all a second chance. You will leave now with all that you have on your back and be damn happy for it. It’s better than what you came here with.”

“And stay gone!” Nedda pushed the old woman out the open kitchen door. “I think that is the last scoundrel out of the household.” She wiped her hands on her apron. “You know that she isn’t wrong. What kind of fool hires the likes of us?”

“A gentle heart to be grateful for.” Kristoff shook his head. They all knew she treated them too well and that the other servants in the neighborhood disapproved of the widow and her poorhouse hires.

He had already warned the mistress of what had been said by the neighbors yet somehow, he already knew that her deep green eyes had missed little of the drama with the servants. She only waited, with patience and without judgment, as if certain they were more than they appeared.

Kristoff knew that he wasn’t the only one among the servants who decided to place his loyalty in her. Who would have imagined their luck to find not just a respectable job, with room and board, but also a sympathetic mistress who treated them with dignity? Miss St. James may as well have been a fairy godmother. “Whatever she is, I have three sets of clothes, a kindly employer, and a place in the world.”

“Don’t misunderstand me, Kristoff, I am not fixing to leave a good thing. She even gives us Saturdays off! I like her well enough. She is odd, but polite. We need to be savvy with this crew, so her family doesn’t toss the lot of us out when they finally arrive and see her mistake.” Nedda chuckled and glanced at him. “She’ll make you Majordomo, I bet, even over old Karl.”

Kristoff had wanted to deny it even as a fierce pride rose within him.

“And when you do get the job, think of me when the house needs a head maid.” She laughed again. “If you can think of anything other than the mistress that is!”

A piercing train whistle reverberated off the platform and broke Kristoff from his reverie. The steam from the locomotives obscured the new group of passengers disembarking onto the open-air platform.

Kristoff gave himself one last indulgence to look upon his mistress.

She looked back at him with a small winsome smile before her back straightened and the expression melted from her features. Head whipping to look ahead, she inhaled in a stifled gasp.

Kristoff followed her line of sight.

A black haired young man, elegant clothes in boyish disarray, strode through the steam towards her with the ease grace of a predator. His lean face spelled trouble from the arch of his eyebrow to the lazy quirk to his smile. Yet it was the light gray eyes that flashed a sinful promise to Kristoff’s mistress. The bold stranger broke with decorum and called out what surely must have been a pet name, “Juniper!”

Clenching his fist, Kristoff forced his narrowed gaze down. He judged the man as one of those arrogant well-born playboys who had created all the rules in society and broke them at will. The rest of the world were just pawns in their drama.

“Kristoff, isn’t that the porter so you can have the baggage taken to the carriage?” Nedda pointed out in a suggestion and a veiled order, her voice unusually soft.

Nodding, he regained sense of duty.

He turned to walk away just as he saw the dark haired stranger grab his mistress’s hand and pull her close. Kristoff didn’t like the tension in her frame and the blush of embarrassment in her cheeks. Miss St. James had the composure of a woman twice her age. As of late he had found her scrubbing silverware late at night and writing in the study until dawn, but Kristoff hadn’t seen her anything other than cool and collected in public.

Nedda pushed him along and marched him away out of earshot. “Don’t watch them if it upsets you.” Her voice was gruff, but not unkind. “We have a job to do. Don’t fret, we can keep the servant gossip mill from picking this up. We’ll protect her reputation.”

Kristoff shivered as he looked over his shoulder at his mistress.

The stranger ran his hand down Miss St. James’s arm as if a lover, but he gripped her wrist instead of entwining their fingers.

Kristoff didn’t understand. He knew her well enough to know that she shied away from casual touch. Not in a nervous manner, but with a firm yet polite demeanor to keep her physical distance. All the servants had soon learned to give her space.

Even in profile, her jaw seemed as clenched as her gloved hands. She glanced at Kristoff before the other man’s finger ran down her cheek to turn her attention back to him.

In the briefest of glances, Kristoff saw her fear.

Get to know more about Kristoff in A Witch Called Red. You can request a review copy here! 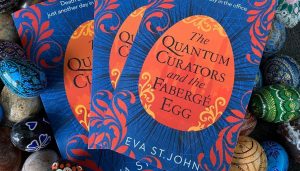 Like the best of us, Eva St. John is a construct. A moving feast of many parts, most of those parts involve gin, science fiction 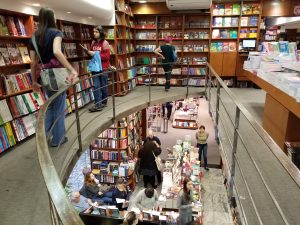