Ella J. Smyth lives in Frankfurt, Germany, and is passionate about romance. Not luffy-duffy romance, but kick-ass stories with exciting elements mixed in. Paranormal romance, romantic thrillers, gay romance–if it’s got two difficult characters finding each other, she’s on board! Second Chance Academy is her latest series.

What is your book about?

Second Chance Fate is the story of 17-year-old Amber who develops power so deadly, she is forced into a magical academy. There she must learn to control her magic or face imprisonment for the rest of her life. Soon she meets three young men who help her navigate this brand-new world she finds herself in. But can she trust them with her life? Or her heart? Read an excerpt here.

Every author does something different with urban fantasy, what is your twist on the genre?

Amber enters a world in which polyamorous relationships are the norm rather than the exception. She not only has to wrap her head around the fact that magic exists, but also that she is allowed, even expected, to have several boyfriends. Understandably, that freaks her out. I love exploring the tension of her small town upbringing and her delight in being the center of so much male attention. Not that that makes her life any easier. Relationships are never easy, after all. I also don’t shy away from same-sex attractions because a) representation matters, and b) they are fun to write.

What inspired you to write this book?

I also love the trope of a completely normal American girl who always had her parents looking after her. What happens if that girl loses everything? Does she crumble? Or does she dig deep and find her inner steel? And what happens when I layer on challenge after challenge, and add some other characters who support her? Will she cave to temptation to get her old life back, no matter the cost to others? Or will she fight for justice? And lastly I want to shout-out to Steffanie Holmes, who wrote a great article (https://jennitalula.wordpress.com/2018/05/02/guest-post-on-writing-reverse-harem-or-so-where-do-all-the-limbs-go-by-steff-green) explaining the attraction of Reverse Harem. Until then, I had no idea there was an option in books for the girl to have ALL the boys. Fine by my, because #whychoose?

What is your favorite of your books?

I love Spirit Elfen, the second book in my Spirit Walker series. It is set in Heidelberg, Germany, a town I know intimately because I spent four glorious years there while studying for my English and Spanish degree. Spirit Elfen allowed me to reminisce about the bars I partied in, the castle dominating the city scape, the banks of the river where we played frisbee and drank wine under the moonlight. It’s one of the most iconic and beautiful cities in the world. It was such a pleasure rediscovering the city through the eyes of my American heroes and allowing them to roam the ancient streets. I even used the old legend of the Heidenloch (Heathens’ Hole) to create a connection to the faerie realm. So much fun!

How many unpublished and half-finished books do you have?

Not that many, compared to some of my writer friends. One of my unfinished novels features an Italian-American girl who learns on her grandmother’s death bed that she is the Mistress of Wolves, the Patrona dei Lupi. The story plays partly in upstate New York, partly in Palermo, Italy, and features zombies in catacombs, lupine shapeshifters, and a terrifying ancient Sicilian tradition of ridding local villages of their elderly. The novel is 70% finished, but I decided to postpone it in favor of Second Chance Academy. Writer’s privilege!

Hi, how are you? I’m still vibrating from the full moon energy. Check out this picture that I took outside a unique cowboy bar and 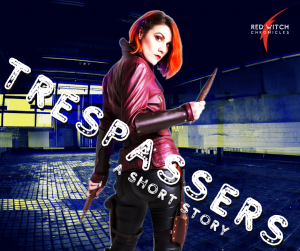 Trespassers is a short story set between book 2 and 3 of The Red Witch Chronicles, an urban fantasy series containing magic, paranormal adventure, and vampire mayhem 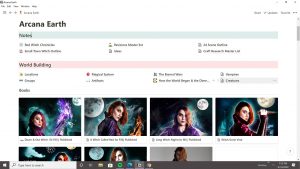 How I Write A Long Book Series

Writing into the Dark I might have researched every way to write a series and found 0 about writing the later books in your series.