Down & Out Witch Excerpt

A week after laser removal surgery on her bite scars, Red endured her checkup. An off-duty nurse’s kitchen wasn’t the Mayo Clinic, but it was as good as an uninsured demon hunter could hope for.

She showed off the healing patches of inflamed neck skin.

Kendra nodded in approval. Still in scrubs after her shift at a Flagstaff charity clinic, a transgender flag pin glittered on her pocket. She was a friend to the local demon hunters. “The other guy did a good job. I’m sure he’d want to see it.”

“They were asking too many questions in Phoenix.” Red held out her wrists, pink from the kiss of the laser, for inspection. The procedure took most of her last bounty, but it was money well spent. Too many monsters noticed a vampire’s claim mark. Other hunters did to. “I didn’t want to find a counsellor or something at the checkup.”

Kendra said, “Why did you think they’d bring in a mental health professional?”

Ignoring the question, Red asked one of her own. “How’s this?” She leaned back against the granite counter and lifted her shirt to reveal the shiny healing skin on her torso. Another friend thought it had been a bullet wound.

“The original hurt like a son of a bitch to remove.”

“What caused it?” The nurse practitioner mused almost to herself. “Obviously, vamps must have done your neck, considering your line of work. This wound wouldn’t have hit anything major, but it—”

“Those were the kind of speculations that I hoped to avoid.” Red shrugged awkwardly. She had already played 20 questions with doctors before. Medical examinations of her body and her mind hadn’t answered much.

While Kendra talked, Red hiked up her skirt and hitched her leg up in a very unladylike fashion. She wasn’t flashing the doc, she was showing off the last cluster of scars.

Looking at the ceiling, Red asked quickly, “Everything healing right down there?”

“Thank you, I guess we’re done.” Red lowered her knee and smoothed her skirt down. “I appreciate you looking at me off the clock. I can get out of your hair.”

“You know if you want to talk about what happened, I’m here.” Kendra smiled wanly. Probably still thinking of the scarlet patches on Red’s thighs, wondering what kind of scars had been there. The dermatologist had certainly been curious. Then alarmed. Maybe he’d seen enough of the supernatural to know about bleeders—humans that willing gave blood to vamps. Or he just thought she was a junkie or a domestic violence victim.

Red wasn’t returning to find out.

It wasn’t like she knew either. Amnesia was a bitch like that. She didn’t need the memories to know what had bitten her repeatedly. Few creatures made such precise punctures. The freshest one on her neck was from a vampire king in the Midwest.

“I’m fine. Vic thought my skin looked too much like my name for a bit there,” Red chuckled awkwardly, hopping off the stool. “I told him that I was just pale, so it looked worse than it was. I wouldn’t have bothered, but you know how he is.”

“It’s good that he takes care.”

“Yeah, yeah.” Red crept closer to the kitchen door. The nurse was kindly, trained to help others. She was just the kind of person that Red should talk too. Somehow sharing her story felt harder than facing a laser.

Kendra gave final instructions, like using sunscreen, with a delicate sensitivity. The goodbyes were as short as the hunter could politely make them.

Back in the parked black van, Red leaned her head against the steering wheel. The Millennium Falcon usually felt like a security blanket. Not today. It was why she hadn’t let Vic come with her. She took a deep breath. The old scars were gone, but she could see them clearly in her head. She had taken pictures before the procedure. Each scar was a clue to who she had been before. With evidence like that, did she even want to know?

The marks were still there. Laser removal was a lie, they didn’t remove the scars, they just put new ones over it.

Maybe that was life for you.

Read on for a sneak peek of Black Market Witch, the 7th book in the Red Witch Chronicles. Find the full series reading order here. 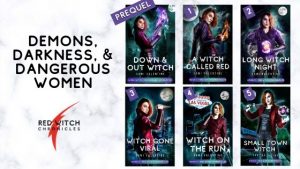 Witch on the Run is out!

Red is used to being the hunter, now she is in the cross-hairs. Red descends into the supernatural underbelly of Las Vegas to enroll in 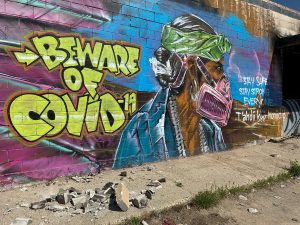 For the last few weeks, I have been gathering together writers to promote the Navajo Nation’s Covid-19 relief fund. We got thousands of views, 100+ shares, and both dollars and masks donated to the cause! I have collected 30+ books from these authors to spotlight below